The Nick, so named using the affectionate name for Nicholas DeRosa, the oldest son in the third generation of De Rosa frame builders, is THE perfect choice of bike for those who ride a DeRosa, or any bike for that matter, for the first time. Nick combines De Rosa technology with a modern look that satisfies both the eye and the rider once he or she mounts the bike. The graphics are derived from the character of the person after whom the bike is named, as are the clean lines of the frame; character and quiet strength that is understood immediately rather than called to our attention. 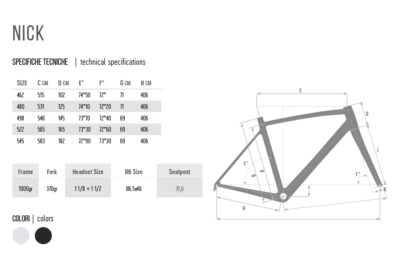